On Virtuosity and Greatness of Mr. NICK CAVE (and its/his implicit connection with the LAW): There is more Heaven in Hell than we have been told 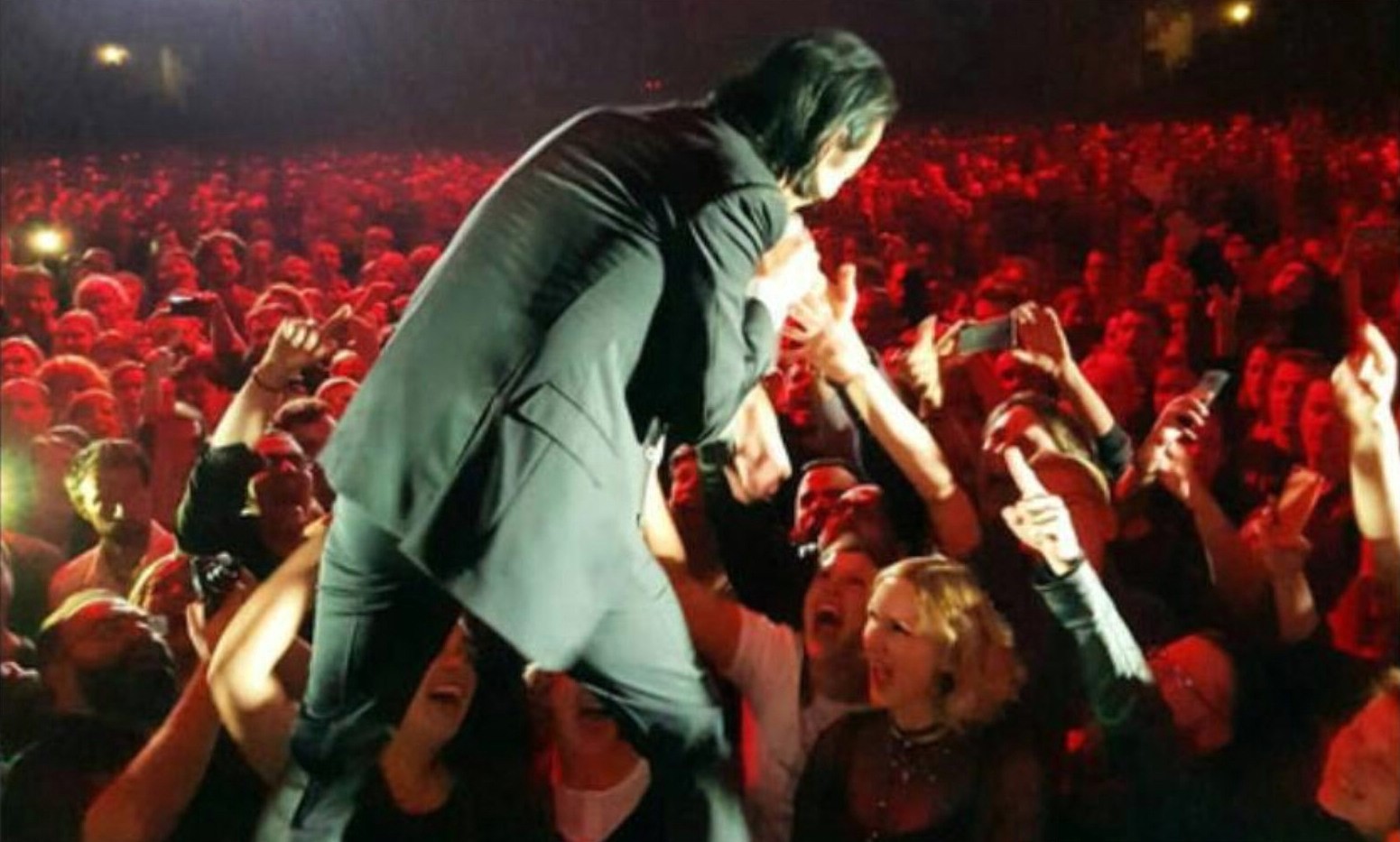 On the concert (or better, on a philosophical-artistic performance, non-institutionalized artistic-musical Mass, musical-dramaturgical transcendence and finally the genuine ethics of pure (Aristotelian) politics as physical, thinking and feeling participation in the moral community) Nick Cave & The Bad Seed, performed in Ljubljana (October 30, 2017).

“I have come to the conclusion that suffering, in general, is a relative feeling, which is most intense in the face of joy.” (1)

Of course, I will not write about biography, discography, and statistics of Mr. Nick Cave. Even though that is something that interests me, but not the most. I am mostly interested in the Cave’s formed philosophy and the experience of the respective time. (2)

I am convinced that Nick Cave is right when he says (no doubt also as a thinking man – “political animal”) that it is better to have any idea, even a small one, than to be without ideas. The importance and greatness of an idea only becomes apparent in the process of its realization. And that an actively thinking person eventually loses interest in what he or she already understands. I easily identify with his fear of losing his memory. Memory, memories are what define us. (3) And – controlled creative imagination: “Let’s put a child in a room with a psychopathic killer and watch what happens. Maybe nothing will happen.” I tell myself that I understand.

Twenty thousand days on earth were like that. (4) He slept, ate and composed and created music. Then it happened, suddenly, unexpectedly, as always when exactly that happens: the death of a child. A trauma. Suddenly, there is no more logic. Or it’s confusing at best. Disappear, oh, and desire itself is “narrative.” It cannot go on for now. Now it becomes nothing. Everything is simply forced upon you. Forecasts, superstitions, fears… past, present and future become the same. Things become invisible, get lost, a mess is created, with a feeling of great heaviness. It’s size that determines them, him and her. It’s all about pain. It’s huge. The loved one stops time as he walks. Pain is all that remains. A catastrophe changes you through the day, in a single day. The world outside remains otherwise the same. But your new negotiations with the world about your place in it begin. You are stopped by a known or unknown person, perhaps a known stranger, you light a cigarette, you are asked: “How are you?” You do not know how you are. You are crying. This is not a friend, he is a stranger. You ask yourself: “When did you become an object of compassionate kindness?” You ask yourself, do you believe in it? Do you believe in it? What do you believe in, what is the object and content of your faith? You begin to understand that life is not a story, even if people hope it is. It is birth and it is death. It’s a slow transition. Until you blow it out. It’s about the struggle. A struggle that requires more effort.

The typewriter is still there, in its place. The housefly yen is undoubtedly there. Even the tears are still there. Would you sing pain? Would you like to be able to? And God… Yes. “God is great, but not necessarily good.”

You notice these bags under your eyes. Where do they come from? “You say to yourself, ‘I must remember to be kind.” You notice something important. “We did not ask for it, but beauty is still around us. Whether we notice it or not. But the world as such is wonderful.” Then – perhaps – some kind of leap just happens. “There are no coincidences. There is a space of magic, not knowledge. There is a melody of other people. It is determined by what you know. It is expressed through the power of words. “And you realize that your life is not a “diary of life” but a “contact with people.” And “you must not choose to alienate yourself.” Trauma is really not the best thing for this step, you are aware of it because you feel it. It is even detrimental to creativity. And yet. And yet. “What is the worst thing that could happen to me?” Yes, exactly, what is it… Is it? Something… ?

She
There is a woman here too. There she is. SHE Is here. You often think that men are formed in two dimensions and women in three, in a kind of 3-D. They know they are successful, they can think outside the box. Even in prolonged pain. They tell themselves again, “I have to remember to be friendly.” Two bodies, in a relationship. Two separate bodies. But with the right connection. A real connection. You understand: “It’s usually the women who move the furniture.” You have to do something.

Imagination needs space. Trauma’s taking him away. But… It’s not over. Because it cannot be. You cannot let this happen – put an end to everything. “There is more heaven in hell than we have been told.” Step… There is nothing but the essential and the decisive: Confidence in yourself in the face of pain. It is true: When love is over, when a loved one ‘goes away’, it really seems that nothing really matters anymore. Because, even more – we love those we cannot love. And so – “and now, now I need you!” (“I need you.”).

You just have to… find MEANING… It is necessary to find meaning in the trauma, in the pain, in the chaos! Even if a loved one “does not live in the heart“. No. He’s just there. And does not live!

It is frightening to realize that before the catastrophe man “foresaw the feelings, but not now.” But perhaps the answer, a kind of key to something, to this, lies in CONSCIOUSNESS: “I am not doing anything important or permanent. I only have consciousness. Here and now. “

It would be premature to believe superficially and recklessly that what is at stake here has nothing to do with the law. On the contrary, everything has to do with the law. With them – and others – with what it really is. But that is for each person to see, feel and decide. Exclusively.

The LAW should be ‘poetry’

God was back in the house. That was freedom. Freedom from everything in the transcendental experience of the event. Man has a right to it. Because music is a civil religion. Constitutionalism is also a civil religion. And both go hand in hand: the inability to listen to music and the love that inspires it is also the inability to understand what a constitution is really about. (8) Exaggeration? No, not for me, not for my heart and soul.

For me, the reading of the Constitution and its implementation must be the language of the Heart and the lovingly forgiving way to the Other, the connection of Man with Man, the question of Freedom, Dignity and Humanity, the framework of the Democratic Community.

I have finished this essay latter, I don’t exactly know when, but at least a few weeks have passed since the Mass.

Andraž Teršek, Ph.D., Professor of Constitutional Law, author of a novel and a book of philosophical poetics, publicist, and occasional electric guitar player.