The Right to Be Protected from Fear 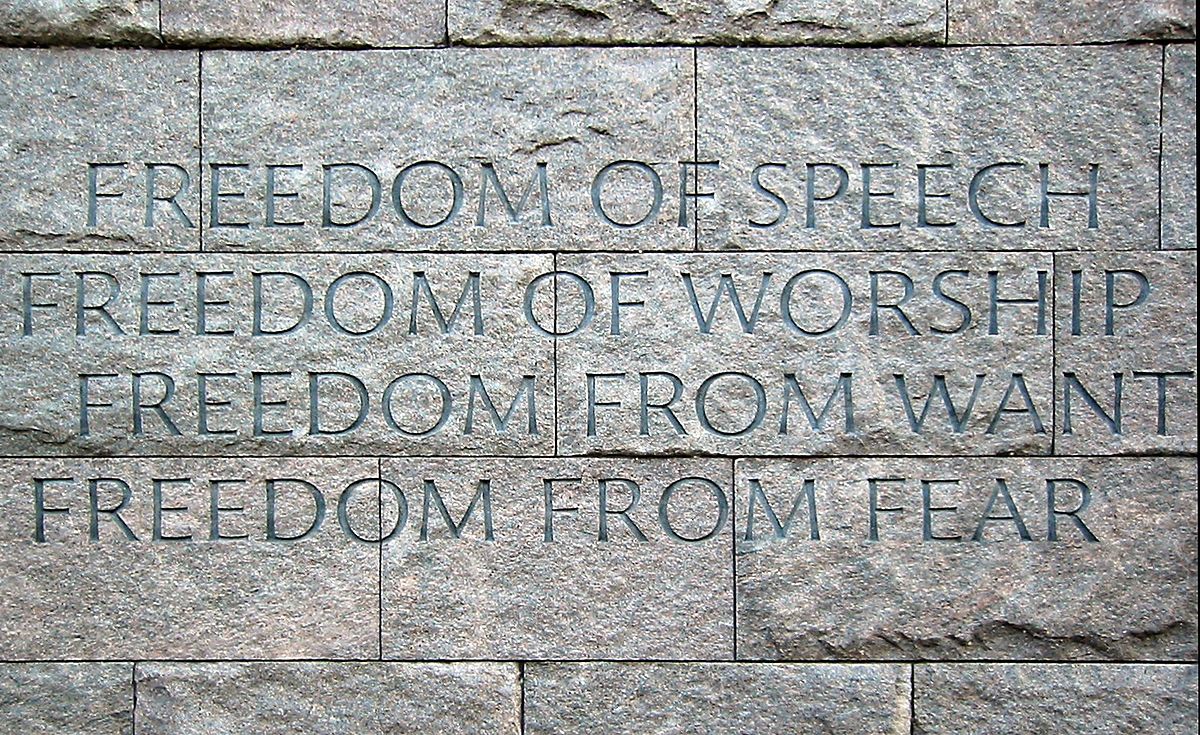 “I was proud to participate in the protests but when I was arrested, it was over for me. They use a strategy of fear. I don’t want to go through that again. I have anxiety attacks and haven’t been able to find work: employers ask for criminal records. I was painting graffiti murals, but now I’ve stopped. Everything has changed.” Humberto Caporalli, 24 year-old graffiti artist, who was charged under Brazil’s National Security Law after taking part in a demonstration for better education in São Paulo on 7 October 2013 (They use a strategy of fear. Amnesty International, Peter Benenson House, UK, 2014).

Just before the end of the greatest war of all wars and years after that, there were discussions and deliberations, finalized in official political and legal writings … Pacts, Declarations, Conventions and Founding Charters were created. From the Philadelphia Declaration, the Atlantic Pact, to the Bretton Woods Agreement, Charter of the United Nations, European Convention on Human Rights, European Social Charter and the Treaty Establishing the European Community. Something new and different was conceived – and started. A different, better, more beautiful world was planned and promised: a different World Order, PEACE and the protection of fundamental human rights and freedoms, human dignity of all people. In all of these documents a fundamental human right to be protected from fear was explicitly mentioned. In its connection to basic and general freedom as such (liberty interest), legal protection (safeguarded by the state, supranational organizations and global community) from material deprivation and poverty, protection of health and healthy (clean) environment …

The right to be protected from fear is the envelope that surrounds the content and social function of all fundamental human rights. It derives directly from the rights to life and freedom. So it also means the right to live in a free world with dignity, to live a dignified life in freedom. Overwhelming function of this right is precisely the HUMANITY. This was sat down as the core of the fundamental rights and freedoms enshrined in the international legal documents and national constitutions.

All of the legally recognized fundamental human rights and freedoms, including fundamental constitutional concepts (also principles and values) of democracy, rule of law, liberty and Welfare State, already implicitly include the right of every person to think freely, to form and have and express opinions and to act by free will, to doubt and to ask legitimate questions. The right to address the centers of power, decision-making and social influence. And to do so without fear.OGLAŠEVANJE

Every single person has a right to be treated as a thinking person. This also includes the human right not to be addressed by the authorities as a fool when and if one does not thing or behave like a fool. However, if this is the case and one thinks and behaves like a fool, one still has the right not to be exploited and abused because of his intellectual capacities. In other words, people must not be treated indecently and humiliatingly, regardless of their intellectual capacities and regardless of the nature of their behavior. Such a right is aimed against the state who is legally, not only morally, obliged not to abuse the lack of knowledge, information and intelligence, a common sense of some people. For the Law is just that: a concept of common sense, in the function of rational and common sense deliberations and decision-making.

But there is, of course, the other side of the same coin. Having the right to think freely and express opinion publicly is at the same time a moral duty of a person, a citizen, a “political animal” (according to Aristotle). It is an obligation, a moral duty to do everything possible in order to become a thinking person, an active citizen, a political subject. To strive to become such a person: thinking and rational person, to be informed, empowered with knowledge and a socially active citizen. To be a person who does not allow himself to be considered a fool; by others, by the state powers, daily politics, political parties, by decision-making institutions and influential social networks. And who does not allow his intellect, his intellectual dignity to be offended, humiliated and taken away. To be entitled to fundamental rights and freedoms exposes a person to its moral duty to be focused on the duties towards others, and The Other (a psychoanalytic term).

Institutionalized social actors (agents, players) of POWER are not Gods. Even though if or when they are the Authority. Nor are they the Rulers Absolutists. Nor are they categorically infallible and untouchable authorities (in the sense of dictatorship, whether enlightened or obscured). Not even then if they happen to think that way about themselves, as being sovereign authorities, or even cultivating a cult of personality. If people are seen and treated as slaves, subordinate to the mob, or as fanatical believers, or as rebels for no reason… there is always a reason to question, doubt, criticize and (as the last resort) resist the states powers, institutions and institutionalized authorities: if not else for the mere reason that it is the POWER or AUTHORITY they are facing, questioning, doubting, criticizing or resisting. Legitimately.

This political, ethical and philosophical problems are constantly confronted by modern society. The problem is growing. And it is not unreasonable to expect it to be even greater after the 2020 pandemic which may not be finished yet (only the first wave with the second already on its way). Therefore, control over governments, over centers of power, over institutions, over the EU administration… will also have to be strengthened. With a simultaneous focus on absolute short-term priorities: public health system, education and science, mental health protection, suicide prevention, protection of the elderly, care for the terminally ill and palliative care, care for families, children and the disabled, environmental protection … While defending already established level of the legal protection of human rights and freedoms as a whole. And preventing, resisting any kind of violence, especially systemic violence. This time, I will limit myself to these, especially absolute priorities.

Prejšnji prispevek
The Universal Declaration of Human Rights
Naslednji prispevek
Just a bis note – or a small note to Aristotle, or to Hannah Arendt, and – the “alphabet of politics”