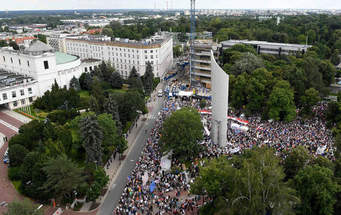 “As the Polish Constitutional Court decided to publish it’s latest abortion ruling the fragile state of peace between the government and the opposing majority is a thing of rhe past. Mass protests started again in most of Poland’s cities. Protesters demand that PM Morawiecki step down and new elections be held in a  hope that such a move will bring the six-year long reign of PiS to an end. Chances are higher than ever as the government’s stronghold in eastern Poland is cracking in the midst of anti-lockdown protests. The Eastern part of Poland for the last twenty years lived from winter tourism making use of the largely unspoiled mountainous nature. With the lockdown declared despite earlier promises protests started even in those counties where in the last presidential elections candidate supported by PiS received more than 80% of votes. Many restaurants (closed since late September), hotels (closed since December), and fitness clubs (closed effectively since April) open their doors for customers despite the government declared lockdown. Police is not doing much to assist sanitary inspectorate officials in their interventions effectively making the lockdown rules a toothless tiger.

Still the former public television, now fully controlled by the ruling party, continuous the propaganda line that “Whole world envies Poland it’s super-efficient government” and “Poles united in support of the government”. The latest polls show that the main information channels of the public radio and television market share is still plummeting fast.  With the loss of revenues from advertisement and with more and more people deciding to not to pay the obligatory subscription in the act of civic defiance the government pushed another bill giving it’s propaganda arm 2 mld PLN (ca. 440 mln €) to keep it afloat.

The end of the Trump term in the USA and incoming investigation about recent changes in the judiciary system by the European Commission only add fuel to the fire. The only good news for Jaroslaw Kaczyński, the leader of the ruling PiS, is that the opposition parties in Poland are locked in stagnation and put most of their efforts into a fratricidal fight in their own ranks.”

From the distance, in my mind and in my heart, I stand shoulder to shoulder with my Polish friends.